‘’Hello, my name is Michael Coote. I am setting up a new organisation and I need your help to launch the Alzheimer Society of Ireland.’’

It was the very early 1990s and Michael had sadly lost his first wife to Alzheimer’s and asked some people to come together and form a national organisation to help Alzheimer’s sufferers and their families.

Norman Stewart stepped into the role as Chief Executive and the consummate gardener Winifred Blythe was charged with responsibility for rolling out care centres across Ireland. The most respected geriatrician Des O’Neill was providing medical support and advice. Michael, a lifelong member of the Irish Management Institute, cut quite a dash. Now in his late 70s he was very determined to create awareness for this destructive and debilitating illness.

At the time, nothing was known about Alzheimer’s. Up until then, it was locking a loved one away as they ‘had trouble with their nerves’ or ‘not well to see visitors today’. In the UK, theatre director and impresario Jonathan Miller was just embarking on a TV series on the disease but public awareness was very low or even non-existent. 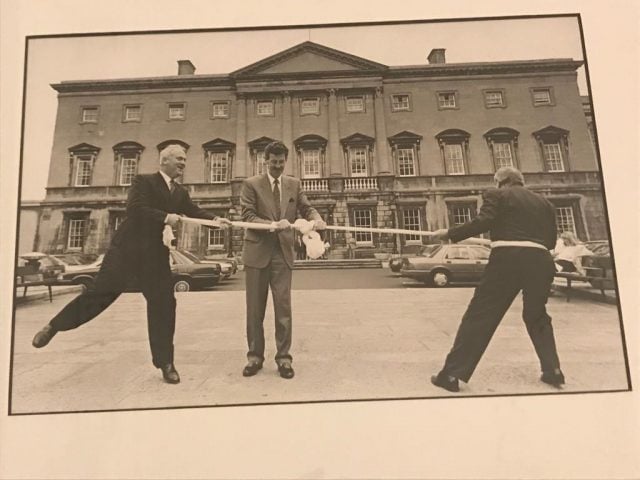 Our role was to immediately set out to break the ignorance barrier. Our firm was charged with the responsibility of creating awareness for an unknown disease with Michael being the most eloquent of spokespersons.

One of the methods we used to capture the public’s attention was a series of Alzheimer photocalls. In order to remember, what do you do? One old trick is to tie a knot in your hanky. This is something we used as our first photocall where we encouraged the main Irish political party leaders of the day, Albert Reynolds, Dick Spring and John Bruton to participate.

A year later, we managed to source six baby African elephants from a touring circus and set up a photo in Merrion Square. Both photoshoots became instant hits, so much so that sell out comic and star of Father Ted Dermot Morgan used a lot of the images in his comic routine.

Michael himself came up with a fundraising idea which was the Forget Me Not flower. We could not use that because the Kidney Association chose to use this as their emblem.  A national fundraising campaign was required so the hospice had a coffee morning and we then came up with National Tea Day, with Barbara Scully as the driving force behind the awareness campaign.

Ever since these early days, the Alzheimer’s Society of Ireland has done an exceptional job in raising public awareness of the disease and helping its victims and their families. At our company, we remain immensely proud to have worked alongside such an exceptional organisation and the amazing people there.

previous
That handshake was a publicity coup for Sinn Fein – why were the opposition missing in action?
next
Is it just me or is it getting crazier out there?
18 Fitzwilliam Square South, Dublin 2, D02 CY65, Ireland
+353 1 676 9575
info@paapr.com