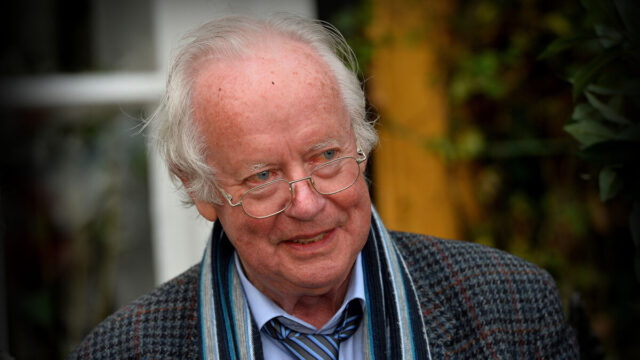 We remember Brendan with Great Fondness

Recently we said goodbye to one of Ireland’s finest poet’s Brendan Kennelly. During various campaigns, we enjoyed his fun, friendliness and friendship. Most notable was a campaign we worked alongside with Javelin advertising for Toyota Ireland. The founder of Toyota, the late Tim Mahoney adored Brendan and asked him to head up a campaign for his car company. The TV ad would feature Brendan talking about the greatness of cars and transport and he a man that could not drive.

Another most notable time was the official opening of Mount Juliet, Thomastown Co, Kilkenny. Brendan was the guest of honour and it was a great pleasure to work with him in crafting his keynote address, which was gently peppered with well thought out funny remarks about some of the politicians in attendance. Anytime you were in his company everyone would be reduced to hysterical laughter.

He once described himself as “The fat poet who wrote thin poems”.
Here is a lovely tribute by Sunday independent, Liam Collins. Liam has very kindly allowed us to use the obituary.

Like the Gaelic poet Raftery or the musician O’Carolan, there was really no need for the prefix of Brendan, to explain who he was: Kennelly was sufficient.
Kennelly was not ‘a man of letters’ like some poets and writers, more the tortured soul, who had “lost years” due to drink, yet he held down a prestigious appointment at Trinity College Dublin (TCD) and wrote numerous books of poetry, prose and essays. Most of all he was at one with ordinary people, those living on the street, the working men and women of the early morning city and the wandering souls he met in public houses and coffee shops.
He could hold his own in any intellectual or social company, but you got the impression he was not comfortable in such society, or that it held much attraction for him.

“This is poetry as base as heavy metal, as high as the Holy Spirit flies, comic and tragic, from litany to rant, roaring at times, soaring at other times” U2’s Bono wrote of his collection The Book of Judas (1991). Addressing a graduating class at the University of Pennsylvania, Bono quoted Kennelly’s Judas saying: “If you want to serve the age, betray it.” His interpretation is, that it meant exposing life’s “conceits, its foibles, its phony moral certitudes. It means telling the secrets of the age and facing harsher truths.”

Brendan Kennelly did not like TCD when he attended it as a student and later, as an academic he told the writer Ulick O’Connor, about “the defences he must build up against the Trinity establishment.” O’Connor wrote in his diary: “The defence should be to protect his art, not his job, which I think is more likely what Brendan is thinking of.”
It is probably a dilemma Kennelly suffered most in life. Ireland of that era was not kind to writers with the insecurities of a tough Kerry upbringing. But unlike O’Connor, Kennelly was not an egotist, he had a passion for word, but also for teaching.
As he wrote of his friend Patrick Kavanagh:
Courage he had and was content to be
Himself, whatever came his way.
There is no other chivalry.

Timothy Brendan Kennelly was one of a family of eight, born in Ballylongford, Co. Kerry on April 17th, 1932. His father Timmie owned a garage and later a pub in the village. His mother Bridie (Ahern) was a nurse. At the age of two, he was sent to an aunt in Sligo, where he stayed for 18 months.
“I never had any problems with my family but I do think that an experience like that leaves you feeling a bit of an outsider,” he said later. He was an excellent scholar and Gaelic footballer at St. Ita’s in Tarbert. He lined out for Kerry in the 1954 All-Ireland minor final against Dublin. With just minutes to go and Kerry five points ahead he fouled Vinny Bell and Dublin snatched two goals in the dying minutes of the match to win 3.3 to 1.8.
On a scholarship for “students of limited means who are natives of Co. Kerry”, he studied English and French at TCD. When I interviewed him in 2017, shortly after he moved to Aras Mhuire Nursing home near Listowel, he told me: “I was absolutely alone, I think I was the only Irishman in the place.”
He lived in digs in Darley’s Terrace off Cork Street where the locals endearingly called him a ‘culchie.’ It was the beginning of a life-long love affair with Dublin. After working in the ESB and a brief stint as a bus conductor in London, he went to Leeds University where he was encouraged as a writer by the Dublin-born Yeats scholar, Professor AN Jaffares.

His first book of poetry, Cast a Cold Eye was published in 1959. He returned to Ireland and was appointed a lecturer in the English department of TCD in 1963, Assistant Professor in 1966, and Professor of Modern Literature in 1973, a position he held until his retirement in 2005.
He lived in Fairview and Clontarf before acquiring rooms in Trinity College, where he lived most of the rest of his life, apart from a period in Sandymount, after he married the American poet, Margaret ‘Peggy’ O’Brien, in 1969. They had a daughter Kristin (Doodle) but the marriage ended when she was 11.

“I loved preparing my lectures at night” he told me during that 2017 interview. “I would work late, grab a few hours sleep and get up at 5am to walk into the streets of the city, where I got to know people sleeping in doorways and they got to know me. ‘Good mornin’ Professor they would call, ‘have you got a few bob for us at all.’”

“I drank fairly heavily” he admitted. He recalled meeting a cross-section of night workers in the ‘early houses’ like O’Regan’s of Tara Street, which opened at 7am. The poet with rock star habits was also frequently to be found in O’Neill’s of Suffolk Street at all hours of the day or night.
Eddie Naughton recalled an early morning session in Grace’s pub in Townsend Street when two men, sitting at the bar drinking whiskey, were asked to contribute to the singing. One refused and the other offered to recite a poem instead.
“It was about a derelict hunchback and I can still see the transfixed face of my workmates as the man, in his mellifluous tones, took us through the dark, wet narrow streets of Dublin’s docklands and into the shadows of that poor unfortunate’s life” wrote Naughton. “It was a magical couple of minutes and I subsequently learned that the dimple cheeked guy who brought the house down on that memorable Monday morning was the great poet himself, Brendan Kennelly.”

“I was more a rhymer than a reader” he told me modestly. “I listened to the ballads that people sang in the street. You have to remember the 1940s and 1950s were times when small things mattered.” He was a lover of the spoken word and was never self-conscious about declaiming his own poems, or works by WB Yeats, William Blake or Raftery. Fr. Michael Hussey told his funeral Mass last Wednesday Kennelly believed “memorising is an act of love.”

His life’s work was “searching for a theme” which he found in The Book of Judas. He tried to get into the minds of evil people, like Oliver Cromwell, reading the Lord Protectors papers as part of his research. “In one of them Cromwell told his son: ‘Be well behaved, if it is possible to be well behaved, but I have work to do in Ireland.’ He was a mass murdered but to him it was work. He was convinced he was doing the right thing.”

In our 2017 talk he told me: “I remember Doodle when she was three years of age, she saw a flower and asked ‘what is a flower, and does the flower die? Will people die? Will I die?’”
Sadly, both of them have, Doodle on 18th of April 2021 at the age of 51 and her father Brendan six months later on the 17th of October, 2021 at the age of 85. He is survived by his brothers and sisters, Alan, Mary, Nancy, Paddy, and Kevin.

Once again thank you Liam Collins for allowing us to reproduce this wonderful tribute to Brendan. Rest in peace Brendan in your much-loved hometown in Ballylongford, Co. Kerry.